Flower’s Battle of Laredo is celebrated in the Cantabrian town of the same name on the last Friday of August. It is a well-known celebration that was declared a Festival of National Tourist Interest in 1908. Thousands of people come to Laredo in late August to closely follow this parade of authentic floats, floats that parade through the streets of Laredo covered in petals. of authentic flowers.

The Battle of Flowers of Laredo is, without a doubt, one of the most spectacular parties in Cantabria, which gathers a multitude of people and is famous nationally.

The color, the music, the happiness, and, above all, the flowers, all of them natural, are the icons of this great party, a party that begins on the last Friday of August in the early morning. During the day, the floats made manually by the locals parade for months. Charangas, fun and even excitement for this important day for the town of Laredo and all its inhabitants.

Without a doubt, the flower is the indispensable element of this well-known party. As a general rule, the flowers used in the floats are planted throughout the year by the coachbuilders. The chosen flowers are usually the dahlia and the carnation, flowers that, before the parade, will be placed in the so-called La Noche Mágica or La Noche de las Flores.

The night before the float parade is a special night of great importance for the town of Laredo. This is the so-called Night of Flowers, at which time locals and foreigners tour the town to observe how the flowers, cut that day or the most recent ones, are placed to preserve their color and freshness, in the floats.

The floats that parade through the streets of Laredo during the Battle of Flowers are authentic works of art that have required a lot of work and imagination throughout the year, hence the nervousness of those who participate so that everything goes perfectly. Each float will have a theme, will be covered in flowers and accompanied by children dressed up in the same allegory. The floats often carry the staggering 30,000 to 100,000 flowers.

The Battle of Flowers is, without a doubt, one of the most beautiful festivals that Cantabria celebrates, a time when flowers, music, brass bands and color are the protagonists. A parade worthy of being known that is accompanied by pilgrimages, markets, fairs and others to celebrate this great day in the town of Laredo. Not in vain has it been declared a Festival of National Tourist Interest.

Iberinbound Travel, iberinbound@iberinbound.com has been leader in educational trips and business meetings. As well as in Shorex, ad-groups. Our specialty are cultural tours and city breaks in the main cities of Spain and Portugal. Our tour operators are responsible of the transports, stay and restaurant reservation; you just have to enjoy the amazing landscape and the experience of being part of the Spanish culture. 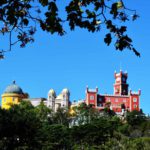