Barcelona is a city that springs to mind easily. One of the draws of Barcelona is the breathtaking influence of Gaudi. This has made Barcelona a modernist masterpiece. Here is a short guide to Modernist Barcelona.

The first stop is the first building built by Gaudi. This was Casa Vicens, built in the late 19th century. This was built as a house for a wealthy, manufacturing family. This is demonstrated by the ceramic tiles that decorate the facade. This was not the only residential project undertaken by Gaudi. He also built La Pedrera, which remains residential to this day. The stone appears like a wave, and is very curious to look at.

Indeed, casas become a symbol of Modernist Barcelona. Gaudi turned his hand to the reconstruction of two houses, Casa Batlló and Casa Calvet. Calvet is considered to be the most convential. On the other hand, Batlló has become an icon of Barcelona and of Gaudi. The building appears to be from an underwater world. Blue stone and ceramics peek out of the stone. The windows are curved like the crest of a wave. You can easily identify this building by the crowds of tourists who queue outside by the hundreds. This building is highly recommended as a centerpiece of modernist Barcelona.

Gaudi also built more than just houses. You can see his work in Park de la Ciutadella, in La Cascada. This fountain was not designed by Gaudi, but was part of a project he worked on. Visiting this park is also a great opportunity to disconnect from the city.

The two most famous projects that Gaudi undertook in Barcelona are the Sagrada Familia and Parc Guell. The Parc is a UNESCO Heritage site and took nearly fifteen years to build. The gardens also include Gaudi´s own home. This hallmark of modernist Barcelona is a maze to explore. You will certainly recognize the park from it´s tiled terrace. This is often the scenefor many visitors’photographs. Other sights to see include the Gaudi House museum and the mosaic salamander. The park has been designed to reflect calm and quiet. This is evident in the design of the buildings. Visiting the park also allows you to enjoy nature alongside art. Gaudi made many pieces for the Guell family, including the Palau and Colonia Guell. The latter of which is a oval crypt and later inspired the Sagrada Familia.

If you think of modernist Barcelona, you certainly think of the Sagrada Familia. It is by far the most famous of his works. It started life in the 19th century and will not be finished until 2030. Gothic influence can clearly be seen here. The structure is Gaudi´s comment on God, man and the heavens, through architecture. The most iconic feature of this building are the turreted spires. The original design calls for eighteen spires and currently, the church has eight. All of these correspond to Biblical scenes.

This is also true for the various facades. All correspond to the Bible, from Nativity, to Passion and Glory. In the future, these facades will also include the seven deadly sins, plus Hell and Purgatory. Completing this, plus the remaining spires, will see the final completion of the cathedral.

To look at it from below can be overwhelming. Therefore, take the time to climb one of the towers to see modernist Barcelona from above. Unfortunately, this icon of modernism is notoriously packed with tourists. It is recommended to book in advance for any tour.

If you would like to see Gaudi´s Barcelona for yourself, visit Iberinbound for your specialized trip. 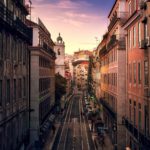