In addition to being a quintessential wine region, among its extensive vineyard fields the region of La Rioja, hides valuable treasures for both its historical and religious and architectural value.

Iberinbound Travel will guide you to find these treasures, and between encounter and encounter, you can taste wines of different lineages that will adapt perfectly to the stage and environment of the time when the different monasteries were built.

Iberinbound Travel, iberinbound@iberinbound.com is a leader in educational & pilgrimage destinations, students groups trips as well as business meetings, Shorex, ad-hoc groups, invite you to discover and live this cultural and wine experience.

The monasteries located in the valley of the Najerilla River or nearby (La Rioja) are prime examples for their beauty, diversity of artistic styles and historical importance. These institutions, which emerged in the Middle Ages, have been of paramount importance in the process of birth of the Castilian language and in the transmission of knowledge in the darkest times. In addition, most of them are in natural environments of great ecological value and enormous beauty that deserve to be visited calmly.

14 kilometers from Anguiano, in the foothills of the Sierra de San Lorenzo and in the midst of a magnificent landscape of oak, beech and pine forests, is the Benedictine monastery of Valvanera, which keeps inside the image of the patron saint of La Rioja , the Virgin of Valvanera, so it is a meeting point of Marian pilgrimages. The original monastery was built in the ninth century, although everything has been restored today. The church, from the 15th century, and the library, with numerous valuable books among which stands out a mined codex from the 10th century, deserve a careful visit.

In San Millán de la Cogolla is the set of monasteries of Suso (or above) and Yuso (or below), the best known of La Rioja and which were included by UNESCO in 1997 in its list of Heritage works Cultural of Humanity. The first and most primitive, Suso, has its origin in the sixth century, although it underwent reforms and extensions until the eleventh. It was originally a simple set of caves that served as a refuge for the hermitages, to which a church with two naves separated by three horseshoe arches was later added. In the gallery of the cloister, the tombs of the seven infants of Lara and three queens of Navarra stand out. In his scriptorium the first words that are conserved of the Castilian language were noted, in the so-called Emilianean glossaries (10th century), where an anonymous copyist wrote down the vernacular meaning of some Latin words in the margins or between lines of the codex. Also in this monastery during the 13th century Gonzalo de Berceo wrote part of his work.

Descending the valley, the second monastery of the complex, that of Yuso, was erected in 1053 under the reign of García Sánchez de Navarra. The most interesting thing is the Gothic cloister, the church – from the 16th century, which consists of three naves with a cruise and oval dome -, the sacristy, the hall of the Kings, the Museum, which houses important works of art (relics, arches … ) and the library, with an important collection of incunabula and scrolls and a facsimile copy of the Emiliane glosses.

Santa María la Real de Nájera was also ordered to build, like Yuso, by King Don Garcia in the mid-eleventh century with part of the loot he got in the conquest of Calahorra, and was rebuilt in the fifteenth century, so the trace prevails Gothic and Renaissance. Stresses the prismatic tower of the XVII and the cylindrical buttresses that give it an aspect of strength, and inside, the choir stalls is a magnificent example of Elizabethan style. The cloister of the Knights, of Gothic style and raised in the first quarter of the 16th century, owes its name to the existence of numerous burials of members of the nobility. There is the sarcophagus of the gentleman Garcilaso de la Vega, who died in 1367 at the battle of Nájera, and also the mausoleum of Don Diego López de Haro. Finally, the pantheon welcomes the remains of several kings of Navarra. The Romanesque tombstone of Dona Blanca is the most beautiful tomb.

In the same town of Nájera is the monastery of Santa Elena, which is worth visiting, inside its church, the main altar and the choir stalls.

The next milestone on the road is the monastery of Santa María del Salvador, in Cañas, cradle of Santo Domingo de Silos, one of the most interesting examples of Cistercian architecture in Spain, built in the thirteenth century by Mrs. Urraca López de Haro. The church, from the 12th century, very bright, consists of three sections, a cruise and three apses. In the chapter room there is a large palm-shaped column whose branches spread to the four sections of the cross supporting the vault. 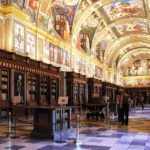 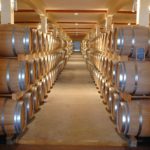