The origins of wine in the Iberian Peninsula date back 5000 years B.C. with remains of elements for the fermentation and maintenance of wines in the Bullas area. The elaboration methods have evolved to the present day, being in the last 60 years when the improvement, in techniques and qualities, has been especially relevant.
The first winemaking treaty we know in Spain has been made in Extremadura, specifically in the Monastery of Guadalupe. In the 16th century, in 1520.
The seed that gave rise to the current designations of origin, we can place it in the area of ​​Alicante, between the sixteenth and seventeenth centuries, where an organ is created that is responsible for the protection of Alicante wines.

The Regulations of Montilla-Moriles, Rioja and Tarragona are created between 1945 and 1947, and finally, in the period between 1954 and 1960 those of Priory, Alella, Utiel-Requena, Valencia, Alicante, Ribeiro, Valdeorras, Cariñena and Penedés

The following after that period, between 1963 and 1966 were the County of Huelva, Valdepeñas, La Mancha, Jumilla, Almansa, Méntrida and Navarra which got the Denomination of Origin.

The wine within our culture
Today, in Spain a broad wine culture is consolidated that is present in almost every aspect of the daily life of ordinary citizens. For example, the concept „Spanish wine” is used, not only to refer to the product itself, but also to refer to social events that include a toast.

There are many methods to classify a good wine, although the most prominent is the Denomination of Origin, but it is not the only way to classify a wine. Basically, this categorization serves to designate and classify wines in Spain based on the protection they have and the regulations they comply with.

We can divide them into:

Iberinbound Travel iberinbound@iberinbound.com incoming travel agency specialized in groups in Spain & Portugal, Shorex, Groups ad-hoc , offers you a package with many wine tours in Spain, depending on the area and the type of wine you want to taste. The transport to the regions is guaranteed and you can schedule with the personal staff of Iberinbound Travel a complete travel in their vineyards.

Iberinbound Travel organizes several wine routes in Spain. One of them is the Rioja Alavesa wine tour, a northern region with wine designation of origin, meaning wines that can only be produced in this area. In that region is produced the famous “wine of Rioja” perfect to accompany a Mediterranean dinner. A few meters far of „La Rioja Alavesa”, we can find Navarrete; another region with many label wine cellar’s and welll known in touristic visits. You can taste and contrast different types of wine enjoying this unique experience that only Iberinbound Travel can bring to you.

Wine routes in Spain with Iberinbound, Wines of La Rioja 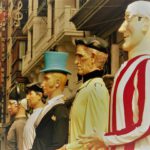