The first Saturday after the feast of the Virgin of August starts the Bilbao Big Week: 9 holidays with plans for all tastes. It is the Aste Nagusia (Great Week) the main festival of Bilbao, Basque Country, Spain.
We will begin by explaining to those who visit Bilbao during their Aste Nagusia festivities, that the city is completely transformed during the Big Week by immersing itself in a popular and festive atmosphere that offers plans at all hours of the day and for all tastes: Gastronomy, music, theater , rural sports, fireworks, plans for children or the indescribable endless party in the Arenal.

The txupinazo ( rocket launched from the Arriaga Theater) and the greeting of Marijaia begin the Aste Nagusia.
Bilbao Big Week has a very special protagonist: Marijaia. This mythical character who receives and celebrates the holidays with her arms raised, is the representation of the parties, optimism and the desire to dance. As a curiosity we will tell you that every year a new Marijaia is built, with a different clothing although always inspired by the rural Basque woman.

Where and how do the Bilbao festivities begin? In the Arriaga theater, next to the Ría de Bilbao and the Casco Viejo Bilbao. In the heart of the town, the Big Week begins at seven in the afternoon every year.
As usual in popular festivals, Aste Nagusia begins with the txupinazo and reading of the proclamation. The peculiarity comes now, when our Marijaia, looks out on the balcony to start the celebrations to the rhythm of his already mythical song ”Gure Marijaia” toned by the crowd that is concentrated in the Plaza del Arriaga.

From this moment and for nine days, until Marijaia is burned in the estuary as the end of the party, Bilbao becomes a great outdoor party, in which each one can make his «Aste Nagusia as». Iberinbound Travel, iberinbound@iberinbound.com incoming travel agency specialized in groups in Spain & Portugal, Shorex, Groups ad-hoc, MICE, proposes the most typical plans to enjoy the Bilbao Big Week, so you can choose the ones you like or vary every day.

Kalejira (parade) with the Giants and Bigheads by the Old Town of Bilbao
Although many identify Aste Nagusia with party and nightlife, the plans start from the early morning with a beautiful festive atmosphere in which to enjoy our most Bilbao traditions.
You can not miss the kalejira that every morning, starting at 11 am, the Giants and Cabezudos of Bilbao do for the Casco Viejo, dancing to the sound of the txistus (basque folklore dancers) and delighting adults and children. The giants are dolls of more than four meters high, representing historical figures of the town: From the villager (man and woman) to the pitxitxi footballer or the Santutxu cigar maker, among others. If you want to know them better, you can visit them in the exhibition of the Basque Museum-Euskal musea, where they stay during the month of August.

Gastronomic competitions of Aste Nagusia and rural sport in Bilbao’s Arenal.
After the parade through the Casco Viejo, we propose a walk through the Arenal, where at noon you can listen to the concerts of the Bilbao Municipal Music Band and, some days, also see demonstrations of Basque rural sport.

In the Arenal it is also where gastronomic competitions are held, dedicated every day to a plate of traditional Biscayan cuisine. It is not surprising to see the busy participation, since gastronomy is part of the DNA of Bilbao and there is no party worth its salt without friends coming together to cook and taste a good dish, such as cod for example.

De poteo (pub crawl) in Bilbao. Eat and drink in Aste Nagusia
Walking among kalejiras( streets), music, street theater, parades and other festive activities … we got the time for vermouth appetizer). And it is already known that in Bilbao, whether parties or not, are very ”poteo” and ”vermouth” fans. You have to taste the typical Basque pintxos or ask for a ration of rabas, as they call there Roman-style squid, and to accompany you will have to drink a txakoli, a unique wine from the land.

Theater in the Bilbao Big Week
The theater is another of the essential traditions of the Bilbao Big Week. In the nine days that Aste Nagusia lasts, the Bilbao people always reserve at least one afternoon to go to the theater to enjoy the special programs of their theaters. The Arriaga theater, the Champs Elysées or the Euskalduna Jauregia Palace, bring the best theater and musical works of the scenic panorama of the moment to Bilbao during the holidays.

In addition, as Aste Nagusia is characterized by being a popular party where you can also enjoy free, in the official festival program there is also its space the street theater, one of the free activities of the Big Week that the people of Bilbao like most . The Plaza del Gas is the stage chosen this year as the setting for a performing arts program for all audiences with theater, humor, acrobatics, etc … And the ”Txikigune” in the Pergola of Doña Casilda is the point where the Children’s shows and street theater for children.

Festive atmosphere in the Txoznas (taberns)at Bilbao parties
It is impossible to talk about the Aste Nagusia of Bilbao without talking about the festive atmosphere in the street and its Txoznas.
Those who visit Bilbao at parties, can only be surprised at the great party that takes place in the Arenal during the Big Week. Something difficult to explain if it has not been lived. As you will know, the Aste Nagusia is a popular festival, in which citizen participation is very important and in which its comparsas actively participate. Well, the Txoznas are giant tents that each troupe rides with its own theme, decoration and music, converted into outdoor bars where you can drink, eat snacks and dance.

Party, crowd and music that only lower their rhythm and lights during the sacred hour of another essential holiday: Fireworks.

Fireworks contest of the Bilbao Big Week
The night arrives, and the most anticipated time: The fireworks that every night from Saturday to Saturday illuminate the Bilbao Big Week. A tradition that nobody wants to miss and a show that is overcome every year, not in vain are part of the Villa de Bilbao contest in which the best European pyrotechnics participate.

Fireworks are launched from the Etxebarria park every night at 10:30 p.m. and the best place to see them is next to the Ria de Bilbao, across the City Hall bridge in the Pío Baroja area, or from the park itself from Etxebarria (after enjoying another party plan: Las barracas). 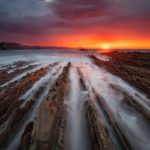